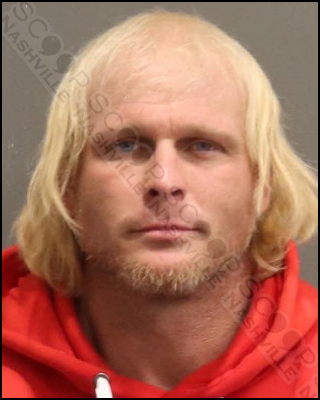 39-year-old Chase Mitchell, known locally as “Mr. 615“, was pulled over in a traffic stop late Thursday night due to the license plate not matching the vehicle he was driving on Old Hickory Blvd. He told Officer Bryan Malone, “I must have put the wrong tag on the vehicle; I own a car lot.” As Mitchell reached into the glove box to retrieve the registration, officers observed a TEC-9 gun on the floorboard and asked Mitchell to step away. Mitchell stated he also had a 9mm Ruger in his front pocket when asked. After securing both firearms, it was discovered Case Mitchell was a convicted felon. He was placed under arrest for possessing the handguns, and at booking, deputies located crystal methamphetamine in his wallet that he brought into the jail.

Mitchell lists West Nashville Wrecker Service as his employer, which is a partner with MNPD and the city of Nashville. When reached for comment, the front office said he wasn’t currently in this morning, and his father, who owns the business, clarified that Chase did not work there in any fashion on a return call.

Chase Keckler Mitchell was booked into the Metro Nashville Jail on January 20th, charged with being a felon in possession of a weapon and bringing contraband into a penal institution. A judicial commissioner set his bond at $7,500.