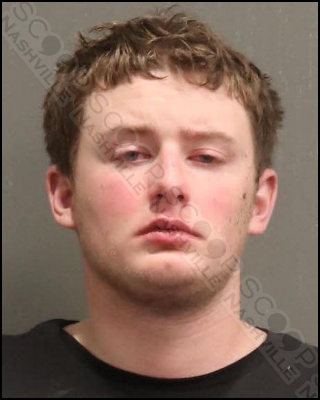 Police say 18-year-old Richard Parker Jones (AKA rparkeyjones from the forklift video) was in an argument with his parents, upset they would not co-sign a car loan for him. Officers responded to the Whitworth Way home of Donald Bradly Jones and Beth Higgins Jones on the afternoon of January 16 after the teenager had punched his father in the face and head before placing him in a choke-hold in a fit of rage. The mother’s 911 call states her son was attempting to strangle his father, then pushed his mother. The parents eventually restrained him, but he escaped their grasp after a short time and began to punch holes throughout the walls of the home before fleeing. Officers encountered him nearby, and as they were taking him into custody, he kicked Officer Blake Langford in the testicles, spit into Officer Jared Dick’s mouth, and spit on Sgt. Ky Luu. Jones was restrained and contained, and transported to booking. At the time of his arrest, Jones had an outstanding warrant charging him with the theft of two cases of White Claws from a Nashville Mapco store.