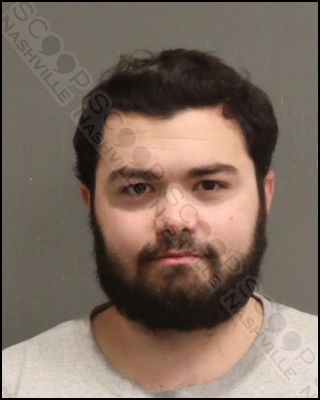 Metro Nashville Police officers responded to the Sentral SoBro on January 18 after residents reported a loud argument coming from the hallway near the elevator. Officers arrived and could hear 26-year-old Adam Foulke screaming for his girlfriend, Samantha Moore, to go to bed as she screamed for him to let her leave. Initially, neither person would answer the knocks at the door, but eventually, Samantha opened the door, and they both exited. She explained they had an argument over her phone being stolen that turned physical when Adam grabbed her and threw her onto the ground, then pushed her into a wall. Police documented multiple bruises and abrasions on the victim at the scene. Adam denied everything and said she was the one that had assaulted him, and he simply “placed her in the bedroom” to stop her from kicking him. Adam was determined to be the primary aggressor and was taken into custody.

Adam C. Foulke of Chapel Ave in Cherry Hill, NJ, was booked into the Metro Nashville Jail on January 18th, charged with domestic assault with bodily injury. A judicial commissioner set his bond at $1,000.