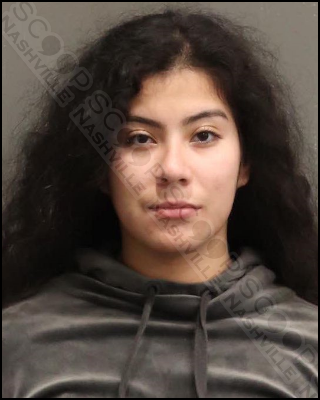 21-year-old Paulina Ceja Sanchez was in the passenger seat of a Jeep Grand Cherokee that was traveling the wrong way on a one-way street in downtown Nashville on January 16. During a subsequent traffic stop, officers smelled marijuana coming from the vehicle, and a probable cause search was conducted. In a zipper bag which she claimed, officers located 13.5 grams of marijuana and individually packaged capsules with a folded piece of paper in each, which contained 0.9 grams of heroin. A loaded Sig P365 was also located, along with scales and a grinder.

Paulina Ceja Sanchez was booked into the Metro Nashville Jail on January 17th, charged with possession of a controlled substance with intent to sell, possession of drug paraphernalia, and possession of a firearm during the commission of a dangerous felony. A judicial commissioner set her bond at $6,500.