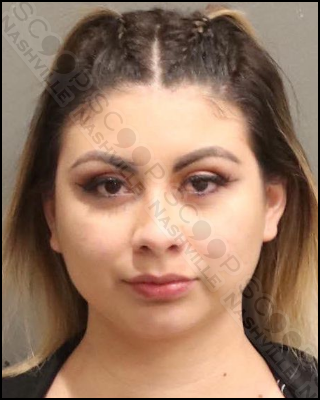 24-year-old Velen Lemus, who is a Nasvhille area content creator for various platforms, including her ‘Funsize Velen’ persona, was booked into the Metro Nashville Jail earlier this month, charged with DUI – driving under the influence. Police say she was speeding and driving erratically, and eventually ran a red light in Goodlettsville, where a traffic stop was conducted. She told police she was on her way home to Ashland City, but wasn’t sure where she was at, or a correct way to get to her destination. She performed poorly on field sobriety tests, and blew a 0.163 BAC on the breathalyzer, more than twice the legal limit in Tennessee. Officers also found she had a prior DUI in 2019 in Rutherford County and is required to have an alcohol interlock device on her vehicle, which she did not have. She was charged with DUI 2nd offense and is free on pre-trial release.