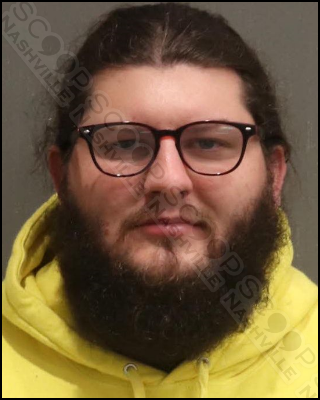 Metro Nashville Police arrived at the Kimpton Aertson Hotel in downtown Nashville to find 27-year-old Camron Siener unconscious on the couch in the lobby. Once he was awakened, he admitted to not being a guest at this specific hotel, and repeatedly stated he was actually staying at “12 and Myself”. Officers escorted him off the property at the request of the hotel and attempted to direct him to an Uber to get to his correct hotel. A few moments later, Siener returned back inside the lobby claiming he was, in fact, staying here, and gave them names of several friends who were also registered at the location. The front desk confirmed that neither he, nor any of his friends, were registered at this hotel. Police asked him one last time to contact someone to come get him. Siener then pulled out a debit card and began to use it as a cell phone, in an apparent attempt to phone a friend. Officers eventually determined he was too intoxicated for his own safety and transported him to booking, where he was charged with public intoxication.

Camron Siener was booked into jail as “Cameron Siener”, as reflected in all CJIS systems.