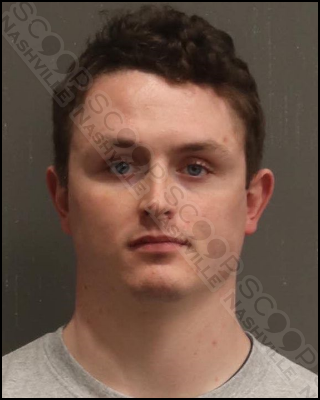 Metro Police say 25-year-old Registered Nurse Christopher Blake Burch is now facing his 3rd DUI charge since 2021. Court records show he had left a Nashville bar after watching the Titans game Saturday, and just after 5:30 p.m. he reportedly nearly ran into another vehicle that was flagging down an officer who was passing by and pointing frantically at Burch’s vehicle, which was also speeding. Burch would eventually blow a 0.177% BAC. Burch is free on a $3,000 bond.

Christopher Blake Burch was booked into the Metro Nashville Jail, charged with DUI 2nd. He is free on a $3,000 bond to his 2940 Hwy 31W address in White House, TN