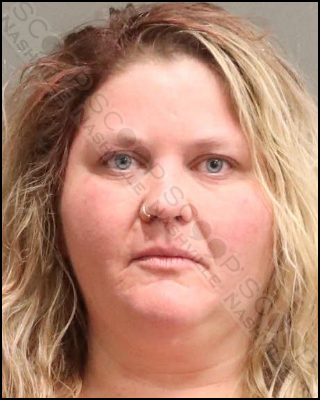 Metro Nashville Police say 36-year-old Suzanne Joiner first told them she had “cocktails” two hours before crashing into a home on Elvira Avenue. She would later admit she had “a couple of beers” just before the wreck. She reportedly used the gas pedal instead of the brake when arriving at a friend’s house, causing her to collide with multiple parked vehicles and the front porch of the house. She performed poorly on field sobriety tests and was taken into custody.

Suzanne L. Joiner was booked into the Metro Nashville Jail on 02/07/2022, charged with driving under the influence (DUI) and violation of the implied consent law. She was freed on pre-trial release to her 1000 W. McKennie Ave address in Nashville.