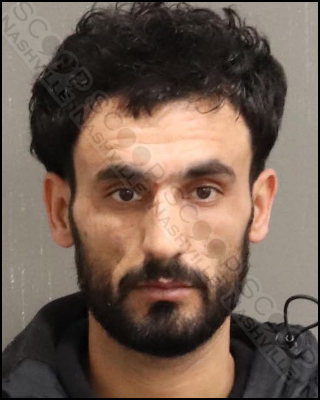 Metro Nashville Police initially responded to a 3rd party call about a domestic dispute early Tuesday morning. They met with 25-year-old Maseehullah Feda and his wife, who explained they were a married couple and were recently-arrived refugees from Afghanistan. As police were reviewing their provided and valid Employment Authorization cards they found the wife’s age to be 15. While allowable with permission in the country in which they were married (and also in Hawaii, Missouri, Montana, Massachusetts, and New Hampshire), police were not going to allow it in Tennessee. Officers inquired about the sexual activities of the married couple, and they admitted they had sex within the past day, as they were married. Officer Paul Hughes took Feda into custody and charged him with felony statutory rape of his wife. Feda remains in jail, while his wife was removed from their home and taken into the custody of DCS.

The District Attorney’s Office responded to our inquiries on this story, stating it was an “incredibly interesting case” they are researching and will have additional information at a later date, as this only occurred a few hours ago.

Maseehullah Feda was booked into the Metro Nashville Jail, charged with aggravated statutory rape. A commissioner set his bond at $3,500.