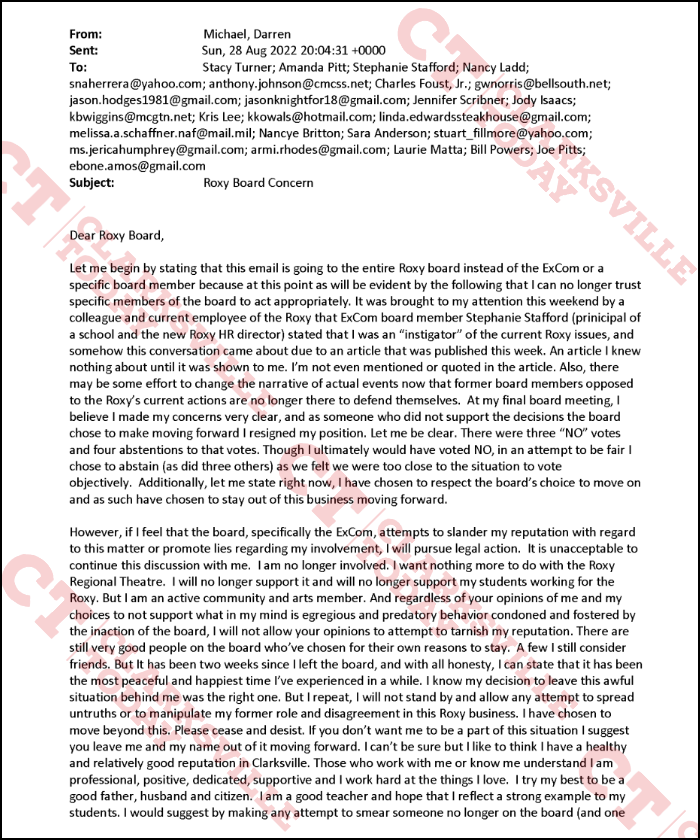 In the time since a half-dozen complaints have been received about Roxy Theater Director Ryan Bowie, alleging inappropriate touching, assault, sexual harassment, stalking, and inappropriate relationships with actors under his employ, two members of the Roxy’s Board of Directors have now resigned in protest as its own executive committee cleared Bowie of any wrongdoing, despite making changes including an HR director position and an “intimacy choreographer.”

Bowie’s name is closely associated with the Roxy Theatre, the City of Clarksville, and the Children’s Theatre programs; however, the city, led by Mayor Joe Pitts, says they can’t investigate the allegations because he’s not actually a city employee and isn’t bound to any ethics rules the city may have in place.

Emails obtained by Clarksville Today show the Roxy Board determined that “any of the allegations made against Mr. Bowie do not rise to the level of liability from a legal standpoint,” so they would no longer investigate the matter, either.

Citizens have been clear, whether there is a legal liability or not, where there’s smoke, there is likely fire, and this many complaints didn’t happen overnight or from single incidents. Citizens, actors, and even the APSU Threatre program professors have all made it clear — The Roxy can’t continue on its current path with the city and the children’s theatre program with Ryan Bowie at the helm, and if we’re waiting on a “legal liability,” the damage will have already been done to the Roxy & the City of Clarksville.

“Mr Bowie is not an employee of the City in the normal, HR sense, apart from the ethics code meaning, so the City’s ethics code does not apply to him in that stricter sense. In short, neither the City, nor the Mayor, nor the City Council, nor I, as City Attorney / Ethics Officer, have any authority or jurisdiction to conduct an investigation into allegations nor to take any action against Mr. Bowie by way of discipline or otherwise, or to review or overturn any action the Roxy Board or Executive Committee may have taken with regard to the internal investigation it conducted, and the actions it has already taken with regard to Mr. Bowie.”

Darren Michael, who has been a Professor of Acting/Directing at APSU for well over a decade, resigned from the Roxy Board of Directors in August, stating he did not support the decisions of the board chose to make moving forward, noting that there were four abstentions in the vote about Ryan, and it was far from unanimous. He added he felt the board was too close to the situation to vote on how to handle it. He will no longer be recommending the Roxy to any of his APSU Theatre students.

Frankly, I’m tired of this drama. The board created this situation. You handle it. I’m out. Leave me out of this unsavory affair. You must live with your decisions. I am done. I would be happy to never utter the Roxy name or its board business ever again. It’s sad but that’s where we are now.

Sara Anderson also resigned from her position on the Roxy Board of Directors due to all of the complaints and how the board was handling them. Despite her personally witnessing some of the inappropriate behavior from Ryan Bowie, she refused to be complicit in the board’s decision to overlook them, including the alleged sexual advances Ryan made toward Calvin Malone, who also ended his time at the Roxy over the situation. The Board has taken the position in conversations that if there were no proof of anyone saying they were uncomfortable at the time the incident occurred, then they would not consider it “sexual harassment.”

Sara wrote in her resignation email: “Regarding Mr. Malone’s allegations, pursuant to our meeting, I understand that, since there was not proof of someone saying “I was uncomfortable,” it is not officially sexual harassment. However, I am still uncomfortable with it. Due to all of the aforementioned issues, I have resigned from the Roxy Regional Theatre Board of Directors.

Caitlyn Porayko recalled that Ryan Bowie “strolls around the theatre calling people “pussies,” “dumb cunts” and “stupid bitches” in a professional setting, as well as in front of the School of the Arts kids.”

In an open records request from the city, Clarksville Today received over 100 redacted documents, mostly citing ‘attorney-client privilege’, though most appear to have just copied the city attorney to prevent disclosure of their conversations about Ryan Bowie. “Entire email” redactions traditionally have not held up in court when challenged. Below is a sampling of the conversations had between Mayor Joe Pitts, some city council members, The Finance Director, and the city attorney:

Since the initial allegations and letters were received, Kelsey McCollaum has also come forward again to remind the city council that she was one of the actors who was touched without consent and “manhandled by Ryan Bowie,” reminding the council that Bowie told her he was “not sorry for what I said or did,” but “sorry people saw it.”

Multiple City Council members have written to the Roxy Board and the Mayor, begging for something to be done about the Ryan Bowie issue, but all of the letters have fallen on deaf ears and been referred back to the meeting where the Roxy cleared itself of any wrongdoing (after which two members resigned).

City Council Member Ambar Marquis has suggested the idea that someone from the city council should serve on the Roxy Board but has not been met with any agreement on the matter.

City Attorney Lance Baker additionally replied to some of the former Roxy employees and actors by saying that even if Ryan Bowie were found to be governed by the city’s ethics policy he could not accept this as an ethics complaint because it was received via email, which “can be manipulated by hackers” and that all ethics complaints must be “in writing” which is defined as “actually written or typed on paper.”

When elected officials asked Stephanie Stafford, HR Director of the Roxy Theater, how to respond to inquiries from the public, she suggested, “At this time, the feedback from the City of Clarksville is that we have done due process, and this is not a concern for them.”

Laurie Matta, who as the city’s Chief Financial Officer is inexplicably involved in this matter, promptly replied that “It should be no comment, especially since there is a threat of litigation.”

There is a city council meeting scheduled for Thursday, September 29th, and this topic is on the agenda, but those familiar with the matter state the agenda item is only to satisfy council members’ concerns so they can openly talk about the issue, but no formal action will prevail.