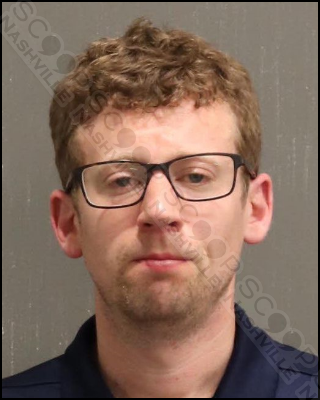 Metro Police say 33-year-old Jamie Levitt was driving 83 in a 55 mph zone at 6:52 p.m. on Friday when he suddenly crossed four lanes of traffic while merging from I-440E onto I-40. As an officer attempted to conduct a traffic stop, Levitt reportedly tossed a beer bottle out the window, then denied it, then eventually admitted it. He asked for a lawyer but then continued telling the officer about how his intoxication. He blew a 0.103 BAC.

Officer Groeneweg says Levitt smelled of alcohol and was nervous during the traffic stop. He initially claimed the bottle he tossed out the window was a water bottle, however, he eventually admitted it was a beer. He reportedly performed poorly on field sobriety tests, and continued to volunteer information about his impairment and intoxication, despite asking for a lawyer. He claimed he had ‘two beers’ and blew a .103 BAC on the breathalyzer.

Jamie R. Levitt was booked into the Metro Nashville Jail at 9:46 p.m. on 08/13, charged with driving under the influence (DUI). He is free on pre-trial release and is scheduled to appear in court in September.