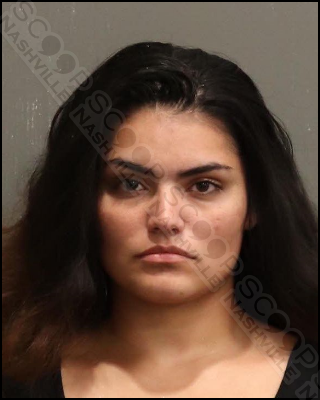 26-year-old Samira Hardcastle, a 6th-grade math & science teacher, was charged with DUI early Saturday after admitting to police she had 4-5 drinks at Tin Roof Bar before crashing her car on her way home. She blew a .220 BAC on a breathalyzer.

Metro Nashville Police responded to a single-vehicle crash outside o 5311 Harding Pike early Saturday morning. The driver, Samira Hardcastle, a 6th-grade math & science teacher, was traveling westbound n Harding and cross over the eastbound lane before colliding into bushes on the shoulder of the roadway.

Hardcastle told police she was on her way home after leaving the Tin Roof Bar, where she admitted to having approximately “4-5 drinks”. She reportedly performed poorly on field sobriety tests, and blew a .220 BAC on a breathalyzer, nearly 3 times the legal limit of .08 BAC.

Samira Raven Hardcastle was booked into the Metro Nashville Jail, charged with DUI – driving under the influence. She is free on pre-trial release.