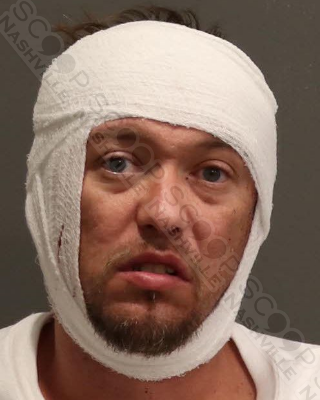 Metro Nashville Police say they don’t know why 35-year-old Christopher Calvert, from Murfreesboro, lunged at officers directing traffic at 2nd & Broadway on a recent Saturday night. They report he was bloody, screaming, and reeked of alcohol.

MNPD Officer Weeks was allowing pedestrians to cross at 2nd & Broadway when Calvert approached, covered in blood, and lunched at the officer for no apparent reason. Weeks activated his body-work camera, called for backup, and advised Calvert to stay back. He continued to scream and cause a disturbance in the middle of the street, causing a safety hazard for others in the area. He had a large cut on his forehead and was transported to a local hospital for treatment prior to being booked.

Christopher Calvert, 35, was booked into the Metro Nashville Jail charged with public intoxication and disorderly conduct. Charges were later dismissed.