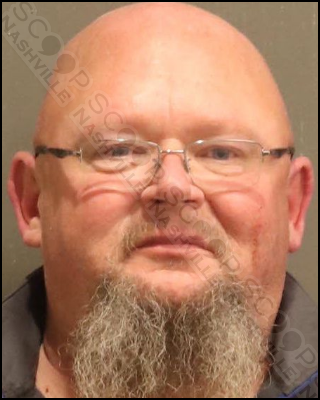 53-year-old Willard Norton, and his 49-year-old girlfriend, Kentucky Marie Slack, are in Nashville this week, along with her daughter, and they certainly didn’t ready the hospitality handbook before their arrival. By 1 a.m. Thursday. Williard ended up in custody after he danced around Metro Nashville Police Officers screaming yelling “Su-Weeeee”, calling them “pigs”, and asking them to “beat me like a N—-r”. The entire reason police were even called to the Airbnb was to arrest his girlfriend after she came back from a downtown bar drunk and admittedly punched her daughter in the face.

Just before 1 a.m. Thursday, Metro Nashville Police responded to 908-A 14th Ave North on a domestic disturbance call. Willard and Kentucky ‘Marie’ returned from drinking and there was an argument with Kentucky’s daughter, during which she admits to punching her n the face, leaving visible bloody injuries.

As officers were dealing with the domestic situation at the location, Williard Norton walked back to the scene and began to yell “Su-Weeeee”, as onlookers appeared from nearby residences to watch the commotion. He then approached a patrol car while yelling “Fuck Pigs” multiple times. As police were preparing to arrest him for public intoxication they asked him to turn around, at which time he began spinning and screaming “Beat me like a Nigger” while resisting arrest. He admitted to being drunk, but added “I’ll probably sober up by the time you get me to jail”.

Willard Norton was booked on the charge of public intoxication. Kentucky Marie Slack was charged with domestic assault with bodily injury and is free on a $2,000 bond to her 25 Dogwood Drive address in Dansville, NY.