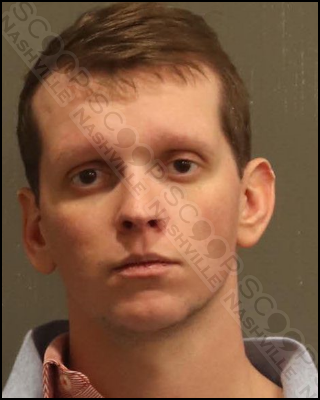 28-year-old Bryce Barlow now faces 3 felony charges after he arrived at the Grand Hyatt Nashville hotel Tuesday heavily intoxicated and telling staff members to “suck my d—“, then unholstering his weapon and threatening to shoot them. Barlow was reportedly upset he was given a room with two queen beds instead of a single king. Barlow was released after 4 hours in booking, on a $25,000 bond.

Metro Police say they initially responded to a disorderly call at the Grand Hyatt Nashville on Broadway and found that Bryce Barlow had become upset with front desk staff after being given a room with two queen beds instead of the single king he had requested. Barlow told hotel staff “suck my dick”, and due to his level of intoxication, security escorted him to his room.

Once in the room, he threatened the hotel security staff that he would shoot each one and displayed his handgun, removing it from his holster and laying it on the bed, once again reportedly threatening to shoot them, and telling them he had more weapons in his vehicle outside.

When officers arrived they secured the weapon and placed Barlow under arrest for 3 felony counts of reckless aggravated assault with a deadly weapon, and possession of a handgun while under the influence. Barlow told police he never threatened to shoot anyone, but that he only told them he would “beat each of them up”. Barlow posted a $25,000 bond shortly after being booked. He bonded out to his 124 Lacadian Drive address in Oxford, MS.