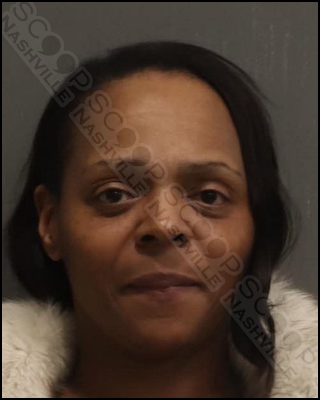 48-year-old former Volunteer Police Chaplain Latrice Hughes was booked into the Metro Nashville Jail over the weekend, charged with harassment of her ex-boyfriend, Nashville Lawyer Newton Holiday. Court records allege she posted a video online titled “PussyMonsters” in which she mentions Holiday, Judge Allegra Walker, a murder over gems used as real estate collateral, all reportedly in violation of an active order of protection.

An arrest warrant for harassment alleges that Latrice Hughes, in violation of an active order of protection, posted a video on Youtube titled “PussyMonsters” in which she reportedly says a multitude of “slanderous things” against the victim (Newton Holiday), his family, children, brother, and associates. She also mentioned Judge Allegra Walker in the post/video and alluded to a real estate deal in which gems were used as collateral, and he believed that Holiday “killed the owner of the gems in an attempt to steal the gems”.

Latrice Hughs lists herself as a “Volunteer Police Chaplain” on all of her court-related paperwork, however, MNPD says she has now been removed from the program and was already on inactive status after the restraining order (below) was filed against her in December. She is charged with harassment, and is free on a $1,000 bond to her 3305 Moorewood Drive address.