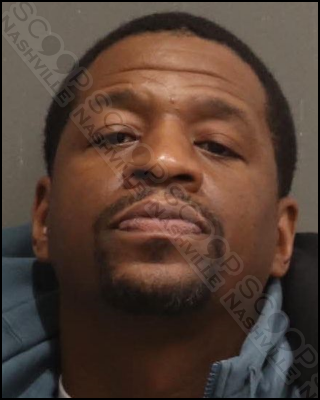 45-year-old Taras Johnson is charged with stalking his ex-girlfriend, Lashonda Campbell on several occasions, one of which reportedly involved him tracking her via an Apple AirTag in her vehicle. The pair have a long history of back-and-forth disputes using the court system, many of which are eventually dropped due to the other becoming unwilling to testify. Johnson is free on a $2,500 bond.

Court records show Taras Johnson and Lashonda Campbell have been in a cyclical dating relationship for several years. On December 10th she ended the relationship and expressed she wanted no further contact from Johnson. After a series of incidents after that date, Johnson has been charged with stalking. Police allege that on December 18th Johnson left his vehicle on her property, despite no longer residing there. On January 10th, Johnson reportedly informed Campbell he was tracking her using an apple air tag inside her vehicle. He also showed up at her residence on January 12th, making threats to get her evicted.

An arrest warrant alleges Johnson also has “sensitive material” he took from the victim’s cell phone, and she believes he has remote access to her device.

Taras Johnson was booked into the Metro Nashville Jail on January 18th and was charged with stalking. He is free on a $2,500 bond.