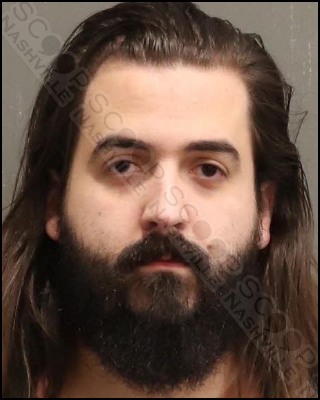 Police say 29-year-old Benjamin Svardahl, who goes by the stage name of ‘Benny James‘, failed to move over for lane closures due to a traffic accident on I-40 in the early hours of Sunday morning, and nearly hit two vehicles and one officer, who had to jump over the barrier to avoid Svardahl’s oncoming car. Officers were able to pull him over 2 miles down the road, at mile marker 205, and observed him to be extremely intoxicated, with thick and mumbled speech and the inability to find his wallet, which was in his lap. He claimed to have had “2 draft beers” during his 3.5-hour music gig that had just ended. He blew a 0.211% BAC on a breathalyzer test.

Benjamin James Svardahl AKA Benny James was booked into the Metro Nashville Jail on February 13th, charged with driving under the influence (DUI). He is free on pre-trial release to his 1042 Gordon Circle address in Burns, TN.