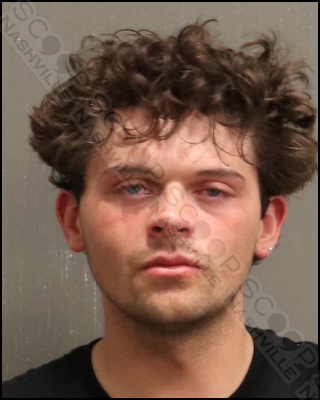 22-year-old Cole Foster Caylor is charged with assault and public intoxication after police say he punched a security guard in the face at a downtown Nashville bar he was being tossed out of, then continued to cause a scene on the sidewalk.

Metro Nashville Police responded to the Lucky Bastard Saloon at 412 Broadway, where security had just removed Wisconsin tourist Cole Foster Caylor from the venue for causing a disturbance inside with other patrons. As security guard Matthew Rayburn asked him to leave, he refused, resulting in Rabuyrn escorting him from the establishment. Caylor then punched Rayburn in the face. As he made it to the sidewalk outside, Caylor remained obviously intoxicated and loudly cruising and attempting to fight with venue staff and arresting officers.

Cole Foster Caylor was booked into the Metro Nashville Jail, charged with assault and public intoxication. He is free on pre-trial release.