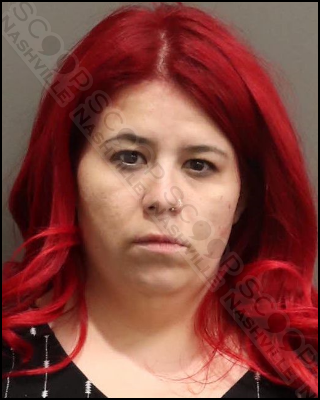 After crashing her car, 32-year-old Esther Martinez explained to Officer Growneweg that she had just come from watching the show Bridgerton while drinking heavily, to celebrate graduating from rehab earlier in the day, celebrating two months of sober-living housing. She was drinking tequila, straight from the bottle, per her own account, along with prescription pills. As it was being explained she was being arrested and charged with DUI, she proceeded to make continued and progressive sexual comments, which she says came from acting out scenes from the Bridgerton show, toward the officer. She talked about showing her breasts to maybe dissuade the DUI charge, even offering sex or oral sex in the back of the patrol car in exchange for a total release from custody. She told the officer the show had made her horny like this.

Esther Martinez was booked into the Metro Nashville Jail on April 18th, charged with driving under the influence (DUI), resisting arrest, and assault of a first responder/offensive contact. A commissioner set her bond at $10,000.