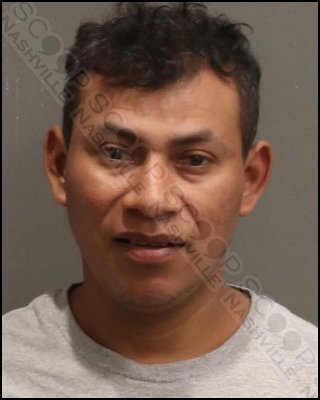 Metro Nashville Police encountered 38-year-old Manual Alberto Garcia at a Mapco on Murfreesboro Pike, where he was parked at a gas pump. As Garcia attempted to exit his vehicle while stumbling, officers observed multiple open containers of Michelob Ultra in the cup holders, including a freshly opened cold beer. On the floorboard of his vehicle, there were over 50 empty bottles of beer. He stated he had consumed 6 beers at that point in the evening.

Manuel Alberto Garcia was booked into the Metro Nashville Jail on May 8th, charged with driving under the influence (DUI), violating the open container law, no proof of insurance, failure to surrender license, and driving without a license. A judicial commissioner set his bond at $2,800, and the Davidson County Sheriff’s Office granted him pre-trial release from their facility.