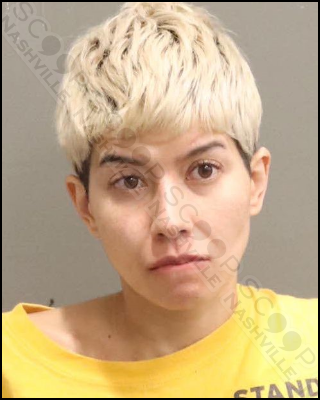 Jonathon Allen says his ex-girlfriend, 31-year-old Denise Carmona, came to his Lebanon Pike residence on June 9th and knocked on the door until his roommate, Harley Parker, answered. She was verbally aggressive with Harley so he called the door and contacted the police when she wouldn’t leave. As he was on the phone with 911, Carmona reportedly went to the back of the home and began to beat on the glass of the back door until it shattered, causing approximately $500 in damages. She was still at the property when officers arrived and they took her into custody for the vandalism and transported her to Metro General Hospital for treatment of her injured hands from the glass shards prior to booking her into jail.

Denise Carmona was booked into the Metro Nashville Jail on June 10th, charged with vandalism. She is free on a $1,000 bond.