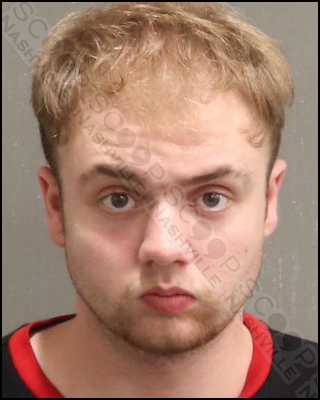 Late Friday night, 21-year-old Conor McNamara crashed his vehicle onto the sidewalk on 4th Ave South just near the Nashville City Cemetary. McNamara freely admitted he didn’t have a valid license to drive and that he consumed “one beer” about fifteen minutes prior to driving. Officers say he performed poorly on field sobriety tests and blew a 0.098% BAC on a breathalyzer. Conor is the son of Sean McNamara, the owner of McNamara’s Irish Pub.

Conor P McNamara, of W. Wilson Blvd in Mt. Juliet, TN, was booked into the Metro Nashville Jail on June 25th, charged with driving under the influence (DUI) and driving without a license. A judicial commissioner set his bond at $2,000, and the Davidson County Sheriff’s Office gave him pre-trial release from their facility.