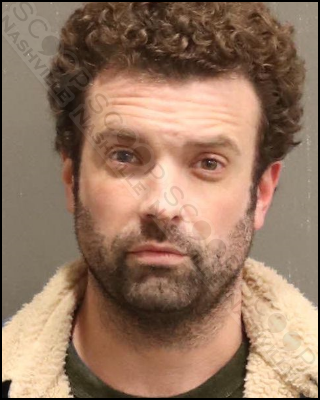 37-year-old musician Joel Bauman, of The Band Royale, told police he had “two beers” at a friend’s house prior to them finding him asleep behind the wheel of his car on West End on February 20th. After performing poorly on field sobriety tests, Bauman would blow a 0.182% BAC on the breathalyzer. He assured officers he had nothing on him she shouldn’t have as he was being taken to jail, however, once at booking officers located a small 0.2 gram baggie of what appeared to be cocaine in his wallet, resulting in an additional felony charge.

Joel M. Bauman was booked into the Metro Nasvhille Jail on February 20th, charged with driving under the influence (DUI), and bringing contraband (drugs) into a penal institution (jail). He posted a $7,500 bond and was released to his 3034 Creekwood Drive address in Nashville.