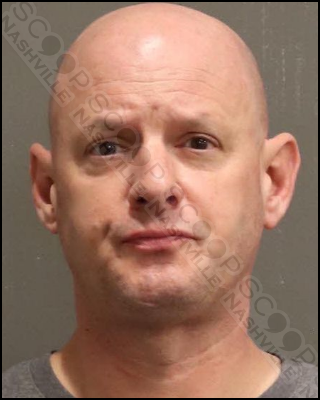 52-year-old Andrew Burch admitted to drinking a pint of vodka prior to a domestic disturbance call at his East Nashville home. His wife, Kelley Lynne Bevington, says she came home to find him drunk on the couch. As she went to feed the dogs, she says he approached her and placed a handgun to the back of her head, and threatened to kill her if she didn’t sit down. Officers arrived to find him standing on the front porch, and displayed his handgun to the responding officers. He walked out to the officers with the gun, and after multiple commands to drop the weapon, he eventually placed the firearm on the sidewalk and surrendered himself.

Andrew Burch was booked into the Metro Nashville Jail on February 24th, charged with aggravated assault with a deadly weapon, and possession of a handgun while under the influence. A commissioner set his bond at $12,500, which he posted days later and was released to his 906 Stockett Street address in Nashville.