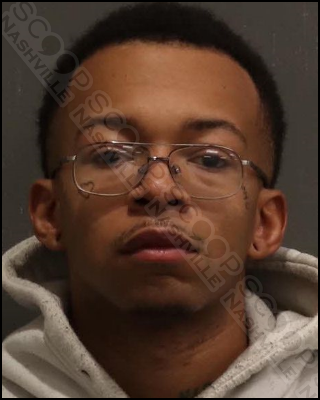 Police say 21-year-old Derrick McNair and Sydney Bell stole $9,610 worth of items from the home of Jose Gonzalez after Gonzalez had let Bell stay there for a few days when he had nowhere else to stay. After an argument ensued about her not cleaning up after herself, Jose went to work, only to return later to find multiple items missing from his home. A neighbor recognized McNair and Bell, and confronted them about taking the items from the home, but was unable to stop them. Warrants were issued from their arrest, and McNair was booked into custody this week.

Derrick Isaiah McNair was booked into the Metro Nashville Jail on March 4th, charged with felony theft of property. A commissioner set his bond at $5,000. He posted bond and was released to his 3948 Rock Creek Drive address in Antioch.