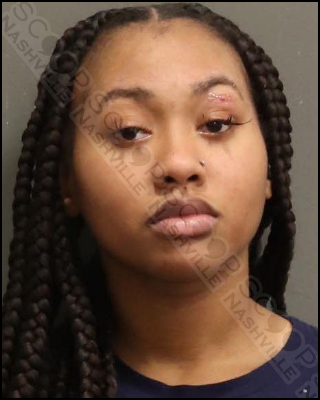 Campus police responded to a fight at TSU’s Ford Residential Complex, where 6 females reportedly attacked Nona Boyd because she had moved into the complex three weeks ago and was living with Cyndee Arnold, which was against the rules. As police arrived and attempted to determine what was happening, and who was involved, Jada Gober initially pointed to other parties involved and indicated who was fighting, including another person leaving in a vehicle, Octavian Williams. During the absolute madness and confusion, 20-year-old Jada Gober approached officers and struck Nona Boyd in the face, and another fight erupted with the pair falling to the ground. Police separated these two when 20-year-old Shantell Banks ran from the parking lot and attacked Nona Boyd from behind, striking and kicking her, leaving her injured and bruised.

Jada Gober was booked into the Metro Nashville Jail on March 5th, charged with assault. She is free on pre-trial release to her 3064 W Heiman Street address in Nashville.

Shantell Banks was booked into the Metro Nashville Jail on March 5th, charged with assault. She is free on pre-trial release to her 405 Hillmeade Drive address in Nashville.