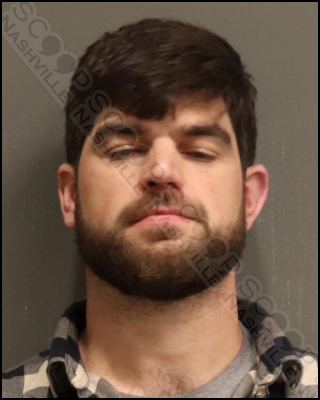 Metro Nashville Police found 34-year-old Canadian Professional Football Player Ryan Bomben banging his head against a local business in downtown Nashville, and when officers approached him he reeked of alcohol and had difficulty standing on his own. Despite multiple attempts to arrange for Bomben to leave the area safely, there was no one to care for him and he had no idea where he was staying. He was transported to booking, where they located marijuana inside his jacket pocket once inside the facility. Bomben was charged with public intoxication and felony introducing drugs into a penal institution.

Ryan Bomben is a professional Canadian football offensive guard who is currently a free agent. He most recently played for the Toronto Argonauts of the Canadian Football League. He is a four-time East Division All-Star and has also played for the Montreal Alouettes and Hamilton Tiger-Cats

Ryan Bomben was booked into the Metro Nashville Jail on March 26th, charged with public intoxication and felony bringing contraband into a penal institution. A commissioner set his bond at $1,100 and he was given pre-trial release to his 1223 De Quincy Cres address in Burlington, Ontario, Canada.