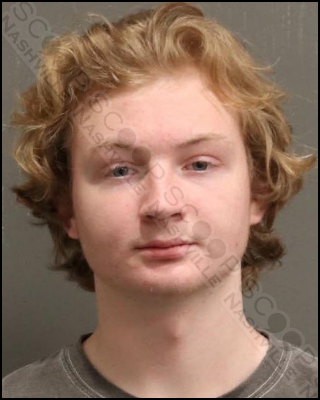 Metro Police responded to the Millenium Maxwell House Hotel Sunday afternoon when it was reported that two individuals were passed out in a vehicle in the parking lot. Behind the wheel of the Volkswagen was 19-year-old Ian Rant, who says he came down to Nashville from Perdue University for the weekend. He had checked out of the hotel but stated he was sleeping in the car because he was too impaired to drive. Rant stated he drank ten shots of vodka and ate some marijuana edibles around 10 p.m. the night before. Police found a marijuana pen on his person, a bottle of vodka in a backpack, along with packages of marijuana edibles. He is charged with DUI and is free on pre-trial release. Metro Nashville Police confirmed Monday that neither Rant, 19, nor anyone else, was cited or charged for any of the other items, edibles, marijuana, open vodka, or other paraphernalia in the vehicle.

Ian Rant was booked into the Metro Nashville Jail on April 3rd, charged with driving under the influence (DUI). A commissioner set his bond at $1,000 and he was given pre-trial release to his address at 14810 Woodside Trail in Grand Haven, MI.