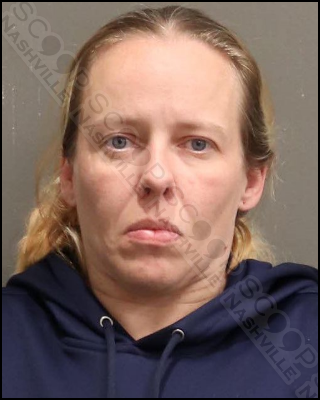 First responders found 39-year-old Tabitha Kirk “not awake and shaking” after she crashed her vehicle on Lebanon Pike. Nashville Fire medics administered two doses of Narcan, at which time Kirk responded and became coherent. She told medical she had snorted heroin prior to the crash. When police arrived, she stated she was afraid of going to jail and wasn’t sure why she crashed or how it happened. She later stated she was seven months sober and didn’t know why she relapsed. She was charged with DUI and driving on a suspended license.

Tabitha Christine Kirk was booked into the Metro Nashville Jail on April 1st, charged with driving under the influence (DUI) and driving on a suspended license, 2nd offense. A commissioner set her bond at $2,500 and she was given pre-trial release to her 821 Murfreesboro Pike address in Nashville.