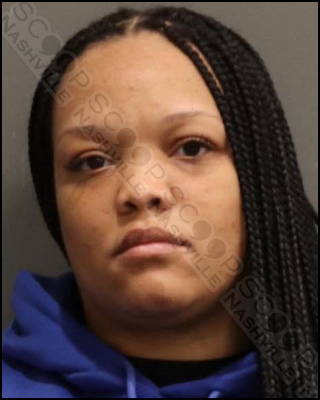 33-year-old Sade Deshay Harris has been indicted by a Davidson County Grand Jury on additional charges related to her continued and repeated assaults on the father of her child, Cheyenne Turner. Last year, a Grand Jury indicted her with aggravated assault and attempted murder after a June 2021incident in which she found him dining with a female at the J. Alexander’s, approached him, asking “so you’re out to eat with a girl?”, before grabbing silverware from a nearby table, chasing him into the parking lot, and stabbing him in the stomach and head with a knife, telling a stranger “I’m finna kill him!”.

Sade DeShay Harris was booked into the Metro Nashville Jail on the new indictments on a $50,000 bond. Her bond on the attempted murder charge was reduced to $150,000 previously.

NOTE: A technical flaw shows the old indictment as a full murder charge on the public DCSO portal, but internally it remains the same ‘attempted’ murder charge from the prior indictment.