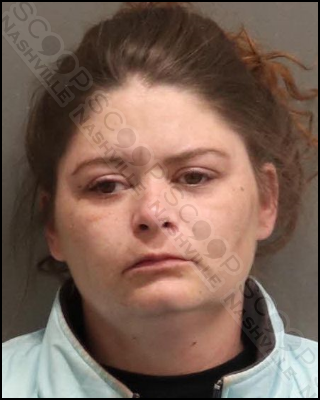 Police charged 32-year-old Kallie Byrum (Capps) with vandalism after responding to an address on Hillmeade Drive where her cousin, Joshua Hicks, had asked her to leave the property. As she refused to leave and the argument escalated, she became angrier as she learned her wifi access had been canceled at the residence. Police say she there fruit all over the location, and broke a fruit stand. Police documented “plenty of evidence of throwing fruit all over the apartment”, and she confessed to the crime.

Kallie Byrum (Capps) was booked into the Metro Nashville Jail on April 19th, charged with misdemeanor vandalism. She is free on a $1,500 bond to her 1201 Hillmeade Drive address in Nashville.