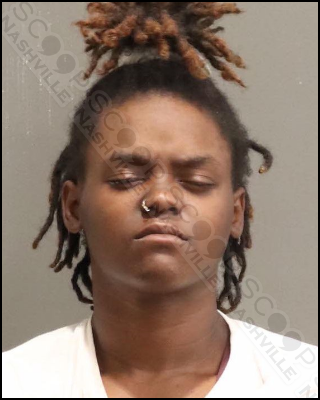 20-year-old Deke’ria West is jailed in lieu of a $76,000 bond, charged with the aggravated child abuse of the son of her boyfriend, who is currently jailed. In a recorded call to him while he was in jail, she is heard assaulting the child at the direction of the jailed boyfriend, Milton Sales. She admits to hurting the child, and he is even on the phone with her while she’s shopping for “ass-whooping remedies” at Walgreens, as she selects scar treatment, cocoa butter, and witch hazel. Once the child was treated at Vanderbilt, doctors discovered severe swelling of his forehead, large bruises and bumps on his head, two black and swollen eyes, a busted lip, welp marks at different stages of healing, some in a deep U-shape, several circular burns on his body, spine fractures, and compressions fractures T1-T4 and T6-T7 on the spine. Despite her admission on the recording, she claims she only hit him with a switch, and all other injuries were from “another babysitter.”

Deke’ria West was booked into the Metro Nashville Jail on April 29th, charged with aggravated child abuse and an outstanding state citation for driving on a suspended license. A commissioner set her bond at $76,000.