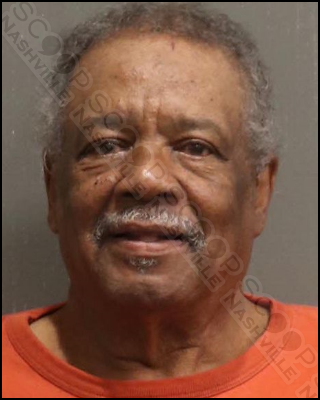 A Metro Nashville WeGo Public Transit bus crashed into 77-year-old Bennie Lee’s vehicle on May 4th. Metro Nashville Police arrived at the scene, they demanded his vehicle be immediately towed due to the location and rush hour traffic. They said the vehicle would have to be towed to the city-partnered tow lot, and told him the costs he would be charged, however, Bennie Lee refused and insisted his vehicle would only be towed to his home, but that shouldn’t have to pay for it, as the city bus struck him. He then stood near the vehicle and blocked the way of the tow truck that the city had dispatched to remove the vehicle from the roadway. Officers contacted public works, who declined to assist in changing the tire so it could maybe just be driven away, stating the location was too dangerous. Police eventually arrested the man and charged him with disorderly conduct so they could tow the car off the roadway.

Bennie Lee Jr was booked into the Metro Nashville Jail by David Snowden on May 4th, charged with disorderly conduct. A commissioner set his bond at $1,000 and he was given pre-trial release.