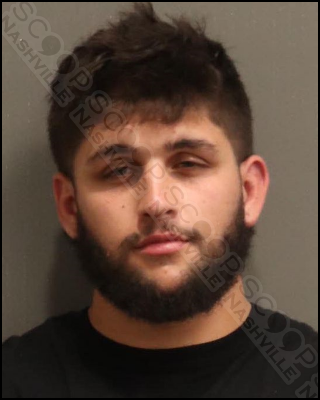 22-year-old Matthew Cebulski was determined to keep the party going at Nudie’s Honky Tonk on Broadway in downtown Nashville Tuesday night, despite being kicked out of the venue. Bouncers at the location say Cebulsk was causing a disturbance, so they escorted him out the back door and advised him he was no longer welcome on the property. Matt Cebulski then walked around the building and back inside through the front door. He was once again escorted outside but remained undeterred. He then attempted to climb through the front window of the establishment and reportedly spit on a bouncer who dared to attempt to stop him.

Matthew Cebulski, of Fort Salonga Road in Northport, NY, was booked into the Metro Nashville Jail on May 11th, charged with assault, public intoxication, and criminal trespassing. A judicial commissioner set his bond at $700, and the Davidson County Sheriff’s Office gave him pre-trial release from their facility.