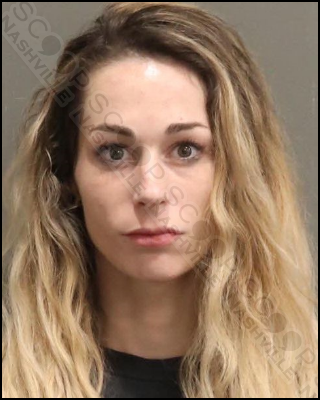 Metro Nashville Police say 29-year-old Sarah Foster Sutherland, of Brentwood, was traveling behind Officer Joseph Gonzales in East Nashville early Tuesday morning when she suddenly passed his police vehicle at a high rate of speed. He reached 80 mph on Gallatin Pike to catch up with her, while the speed limit is 40 mph in that area. She eventually made a U-turn, stopped parallel to his vehicle, and stared at him “as if confused as to what to do,” according to the officer. She claimed to be coming from a bar and was driving fast to get away from patrons who were “bothering her.” Inside the vehicle was a white powder, which she admitted was cocaine. She was charged with DUI and drug possession and transported to booking.

Sarah Foster Sutherland, of Carnival Drive in Brentwood, was booked into the Metro Nashville Jail on May 17th, charged with driving under the influence (DUI), cocaine possession, and violation of the implied consent law. A judicial commissioner set her bond at $3,500, and the Davidson County Sheriff’s Office gave her pre-trial release from their facility.