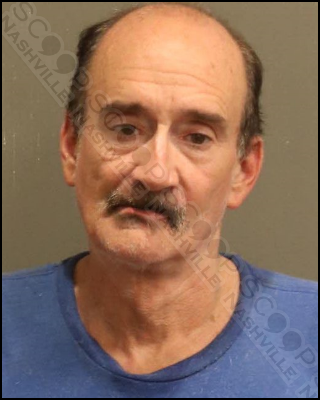 58-year-old Ronald Hutt stopped by The Hermitage Hotel in downtown Nashville on several days this week, eating and drinking at the swanky bar, telling the staff to just charge it to his 5th-floor room each time. The scam *almost* worked out for him, however, on Wednesday hotel staff observed Hutt, who is unhoused, “making a mess” in one of the hotel’s public restrooms. At that point, his story was questioned, and he admitted that he was not a guest of the hotel, nor knew anyone there, and it was a con to eat and drink at the hotel bar. After a brief chase, hotel management stopped him on the sidewalk as he attempted to flee, and police arrived shortly after. In total, he charged $499.44 in food and beverages to a room without authorization.

Ronald Everett Hutt was booked into the Metro Nashville Jail on June 15th, charged with public intoxication, criminal impersonation, and theft. A commissioner set his bond at $2,000 and the Davidson County Sheriff’s Department gave him pre-trial release from their facility.