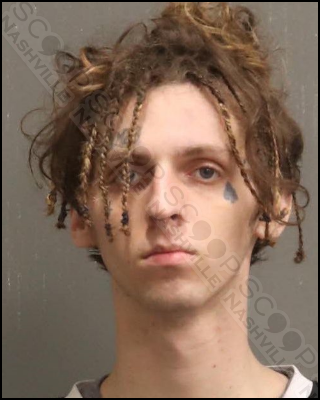 Metro Nashville Police were attempting to serve a felony burglary warrant on 24-year-old Jacob Petitt, who they observed under the awning at 825 Murfreesboro Pike. As they approached the very identifiable young man he attempted to give officers a fake name and said he was staying with a friend at the motel, pointing to a man on a bench — who shook his head ‘no’ that he had no idea who Petitt was. He then claimed he was just someone stopping for coffee, and as officers told him he was being detained he attempted to flee and both he and the officers fell to the ground, while each grappled for control. Petitt got in several kicks to an officer’s arm and legs, leaving him with abrasions before the officer got him into handcuffs. The outstanding burglary warrant for an April incident in which Petitt was caught on camera ransacking and burglarizing a business on Plus Park Blvd, stealing over $12,000 in electronics.

Jacob Daniel Petitt was booked into the Metro Nashville Jail on June 28th, charged with felony burglary, criminal impersonation, resisting arrest, criminal trespass, and assault on a first responder. A judicial commissioner set his bond at $25,500, and he additionally has a hold on his release for outstanding warrants from Robertson County.