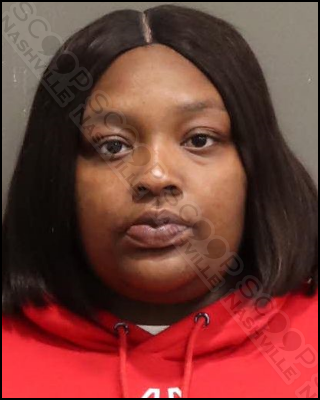 24-year-old Kierra Symone Jemison was jailed Monday on multiple charges, including felony stalking and felony aggravated assault with a deadly weapon. Court records show that just after lunch on Monday, Jeremiah Brown called 911 from an Arby’s on Gallatin Pike to report his ex-girlfriend, Keirra Jamison, threw a knife at him as he was walking along Gallatin Pike near Madison Square.

He says she’s stalked him for a while and has stalking warrants outstanding from July. After she found him walking, she reportedly exited her vehicle and accused him of wanting to sleep with other women. He avoided her attempt to stab him, but she returned to her car and then threw a large cooper Chef’s knife at him, striking him in the elbow, requiring stitches. He also had injuries to his neck, which appeared to be from her fingernails when she was grabbing at him.

She was also served with a warrant from July charging her with stalking after she followed Jeremiah and his new girlfriend and ‘rolled up behind them’ as they parked at a residence. She attempted to run over him with her car during that incident, which was captured on a store’s security camera. An hour later, she texted him she was sending her people over to “sweep” his apartment, which he took as an immediate threat to his safety.

Kierra S. Jemison was booked into the Metro Nashville Jail on August 1st, charged with stalking, felony aggravated assault with a deadly weapon, and felony aggravated stalking. A judicial commissioner set her bond at $12,000.