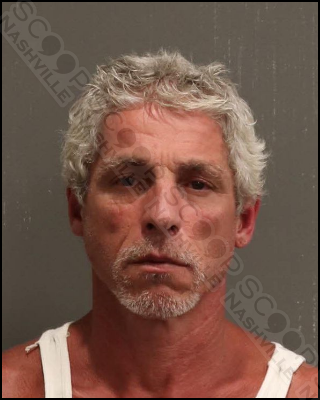 54-year-old Aaron Dudley is charged with pulling his girlfriend around a downtown Nashville parking lot by her hair while on vacation from Pennsylvania, admitting he did it because she became upset when his ex-girlfriend called his phone.

Metro Police responded to 1100 Broadway as a citizen flagged them down, advising he was witnessing a man pulling a woman around the parking lot by her hair. Several witnesses confirmed the incident, and police identified Aaron Dudley as the man accused of the assault. Dudley admitted the couple was on vacation, and his ex-girlfriend had called his phone, upsetting his current girlfriend. He says she became “verbally irate” at him, resulting in him in pulling her around the parking lot of the convenience store by her hair.

Aaron Dudley was taken into custody and transported to the Metro Nashville Jail, where he was charged with domestic assault. He is free on a $1,000 bond.