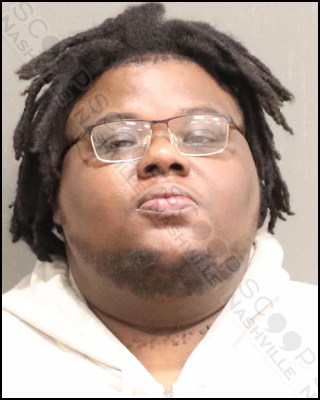 28-year-old James Kennedy, AKA “Busta Buss Checkmate” is free on a $32,500 bond after police say he would not let his wife, Takarria Kennedy, leave their home and assaulted her when she attempted to leave the residence anyways. He grabbed her and tossed her against a wall. One of her female friends, Amaya Forrest, who is also a former lover of the husband, was visiting her at the time, and when she confronted James Kennedy about the assault of his wife and said she was going to call her brother, he pulled up his shirt exposing a handgun in his waistband, then grabbed her and attempted to push her down a set of stairs. As Forrest left the residence, the wife attempted to follow her and physically kept her from leaving for a substantial period of time.

James Jamal Kennedy was booked into the Metro Nashville Jail, charged with aggravated kidnapping, domestic assault, and the violation of an order of protection. He posted a $32,500 bond and was released to his 4456 Benchmark Drive address in Antioch.