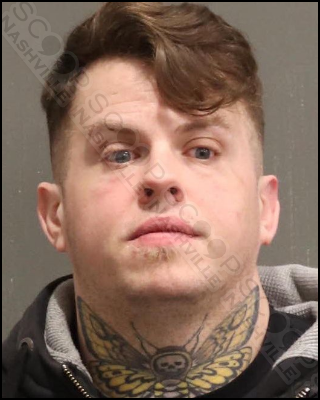 West Nashville Police say Erin Smith told her live-in boyfriend, 38-year-old barback Chad Dunn, their relationship was over Saturday evening, and shortly after he grabbed her by the throat with both of her hands and strangled her for approximately fifteen seconds, to the point she came close to losing consciousness. While holding both hands around her neck he then headbutted her. Chad Dunn then grabbed a pistol, pointing it at her chest, stating “I want to protect you”. He then put the gun in her hands and forced her to point it at his forehead, telling her to “do it!”. Smith then fled the apartment with the gun, driving to West Precinct where her injuries were documented and she was treated by medics.

Chad M. Dunn was booked into the Metro Nashville Jail on February 27th, charged with aggravated assault/strangulation. He is free on a $5,000 bond and was released to his 6700 Cabot Drive address at Views on the Cumberland, in Nashville.