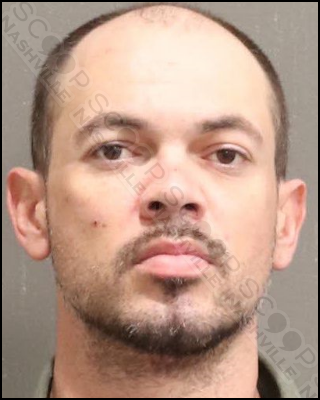 Police say 34-year-old Daniel Gann entered TriStar Skyline Medical Center in 2017 when he was 30 years old and walked into the room of a 55-year-old disabled patient, shutting the door behind him. Neither man knew the other, and he asked the man in the hospital bed his name and confirmed he was Parker Phillips. He told the man to get up out of the bed and then began to punch him in the face as he raised up, knocking him to the floor. The victim fought his way to the door, at which time a nurse heard his calls for help. It was later learned that Daniel was the nephew of the man’s ex-girlfriend. Daniel Gann was given a state citation for assault, for which he never appeared. 4 years, 3 months, and 7 days later he was booked into custody on the charge.

Daniel Gann was booked into the Metro Nashville Jail on March 6th on the outstanding citation charging him with assault. He was ROR’d to his 5472 Lytle Creek Road address in Murfreesboro, TN.