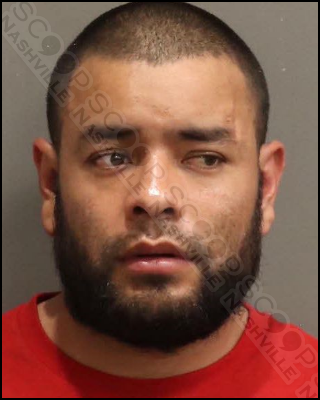 Police say 31-year-old Oscar Garcia told his wife, Julia Hernandez, he was going to drive to Atlanta, and she told him he should not because he was drunk. Unhappy with her response, Garcia reportedly pushed her multiple times and asked to use her phone, as he had broken his. When she refused to provide her phone, he then landed two punches to her face with his fists before fleeing the scene in a vehicle. He returned to the residence while police were taking the incident report and claimed his wife bashed her own head into a tree, despite there being multiple witnesses to the assault.

Oscar Garcia was booked into the Metro Nashville Jail on March 6th, charged with domestic assault with bodily injury. A commissioner set his bond at $2,500. He posted a cash bond and was released to his 4747 Bowfield Drive address in Antioch.