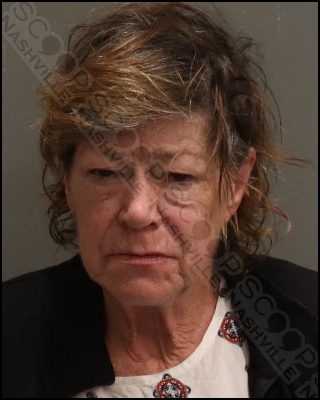 Police say 67-year-old Myra Ashton was causing a disturbance at a downtown Nashville construction site as she was stopped in traffic at a “road closed” sign honking her horn while making obscene gestures at nearby workers and citizens. Upset she was unable to pass, she then urinated into a plastic cup and threw it. She then began to spin her tires on the roadway and police eventually arrived. She admitted she had been at a restaurant with a friend where she had a margarita prior to driving. After being placed into custody for DUI, Ashton attempted to kick out the window of the patrol car and used racial slurs, including the N-word, toward officers in what they described as a “venting session” in court records. She then fell asleep, and when she was awakened she asked who the officer was, and where she was, then looked around and stated: “Aw, shit, I’m in handcuffs!”

Myra Ashton was booked into the Metro Nashville Jail on March 18th, charged with driving under the influence (DUI). A Commissioner set her bond at $3,000 and she was given pre-trial release to her Battery Lane address.