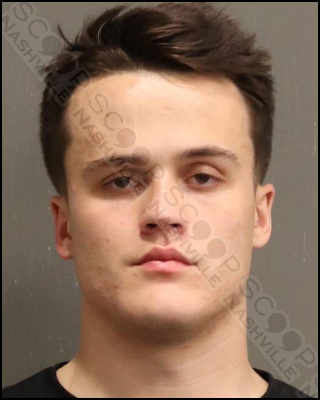 21-year-old Wyatt Thomas Whitlock, of Newalla, OK, threw a large metal chair from the third story of Jason Aldean’s rooftop bar on Saturday, sticking a female in the head, who was on the sidewalk below. The victim, Madison Ferguson, suffered a severe laceration requiring medical treatment. Police located Whitlock, who was heavily intoxicated, and he stated he did it “by accident”. He is charged with felony aggravated assault with a deadly weapon.

Wyatt Thomas Whitlock was booked into the Metro Nashville Jail on March 16th, charged with felony aggravated assault with a deadly weapon. He is free on a $10,000 bond to his 15025 SE 119th Street address in Newalla, OK.