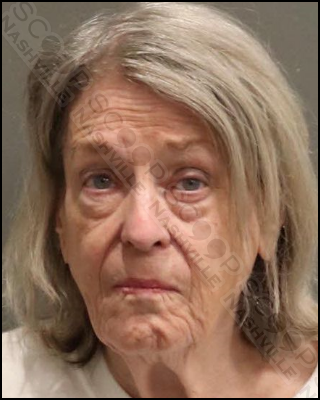 When officers found 72-year-old Melinda Newpher behind the wheel of her 2014 Ford Explorer on Acklen Avenue they say she was so intoxicated she couldn’t even perform standard field sobriety tests safely and had to hold onto an officer to stand up. She was reportedly disoriented and reeked of alcohol. She explained she was going “home” and coming from “here”. Newpher would later blow a 0.203% BAC on a breathalyzer, over twice the legal limit in Tennessee. A witness says she sat through several traffic light cycles and could be seen nodding off and sleeping while behind the wheel.

Melinda McCabe Newpher was booked into the Metro Nashville Jail on April 3rd, charged with driving under the influence (DUI). A commissioner set her bond at $1,500 and she was given pre-trial release to her 2007 19th Ave S. address in Nashville.