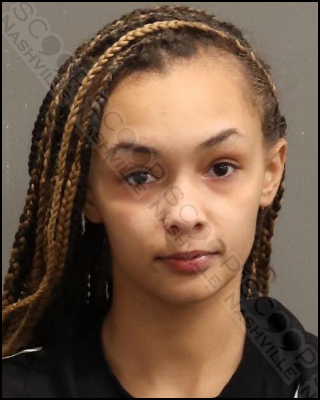 18-year-old Jayla Shepard faced multiple charges after police say she was the front-seat passenger in a vehicle driven by her 17-year-old boyfriend that was stopped at the I-24/I-40 interchange. Officers immediately noticed a “large amount” of marijuana in the center console area along with some joints. A search of the car revealed a backpack behind Shepard’s seat containing another just over a half-pound of marijuana, baggies, scales, and a Glock 17 with no serial number. The juvenile boyfriend denied possession of any of the items, and Shepard claimed the marijuana was hers “but we both smoke it”, and states the juvenile bought the gun for her, but she was afraid of it. She is free on pre-trial release, charged with two felonies and three misdemeanors.

Jayla M. Shepard was booked into Metro Nashville Jail on April 7th, charged with illegal possession of a weapon, possession of a weapon during a felony, contributing to the delinquency of a minor, possession of drug paraphernalia, and felony drug possession with intent to distribute. A commissioner set her bond at $14,000 and she was given pre-trial release to her 1316 Tulip Grove Road address in Hermitage.