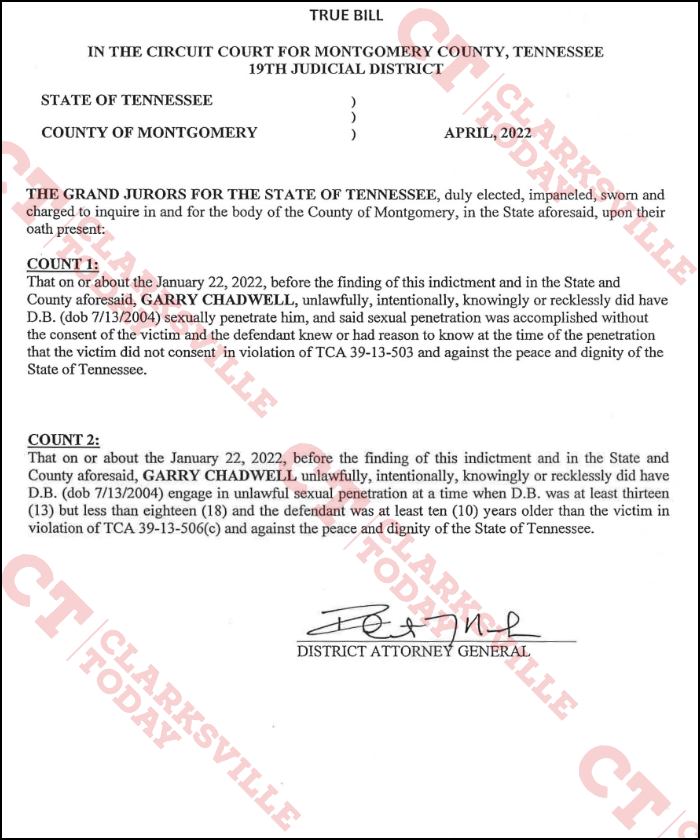 49-year-old Kenwood High School Assistant Principal & Athletic Director Garry James Chadwell was jailed Tuesday evening, charged with forcing a 17-year-old to penetrate him sexually. The indictment, a copy of which is in the story, alleges one count of forcing the child to penetrate him without the child’s consent, and another count of adding the statutory rape charge. The incident occurred on January 22, 2022.

Garry James Chadwell is free on a $30,000 bond to his 3185 timberland Drive address in Clarksville, TN.

49-year-old Kenwood High School Assistant Principal Garry James Chadwell was jailed Tuesday evening, charged with rape/statutory rape of a victim 13 to 18 years old. In a statement to Clarksville Today, the Clarksville-Montgomery County School System (CMCSS) says they were made aware of the criminal investigation and Chadwell had been working at an “alternative worksite” since that notification until his arrest Tuesday evening. He is free on a $30,000 bond. #developing

Chadwell was hired by CMCSS in 2014 and has been an assistant principal at Kenwood High School since 2016. This is a developing story that will be updated as more information, such as the arrest warrant and affidavit, is made available.