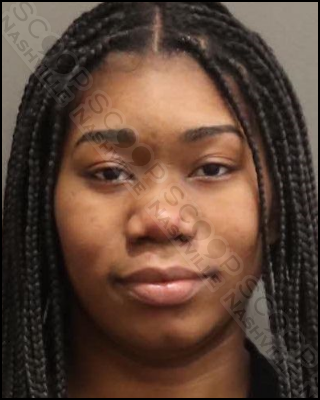 Police say 23-year-old Jayla Wiggins pushed her past the father of her child as he stood at the front door of his home in an effort to retrieve the child from the inside. She had a handgun in her handbag and threatened to “shoot this motherfucker up” during the scuffle. In an attempt to restrain her from entering his residence, the victim, Segmund Gordon, Jr., sustained injuries to his arms, hands, and chest. She also vandalized a nearby sliding door during her rage. Wiggins is charged with felony aggravated burglary and is free on a $5,000 bond.

Jayla M Wiggins was booked into the Metro Nashville Jail on April 20th, charged with felony aggravated burglary. She is free on a $5,000 bond to her 3711 Dickerson Pike address in Nashville, TN.